One of my main missions when working on The Colonist was to make it operate differently from other Tower Defence games. The key way I’ve done this is to add a more complex economy to the game and defined a specific game-winning objective.

The main aim of your mission is to terraform Planet X (could it be Mars?) in time for your fellow humans to arrive on the planet with a breathable atmosphere. This means that you have 20 in-game days to complete your mission – otherwise your friends will arrive to a poisonous atmosphere and you’ll lose the game. This really puts some meaning into my economy system. You’ll have to keep the air quality high if you want to be able to terraform the planet – if its not at nearly 100% air quality then your terraformer simply wont work. The challenge for the player comes with the fact that each tower you build will lower the air quality – thus meaning you’ll have to build air purifiers to counterbalance the pollution issue.

This brings us onto the second part of the economy system – matter and energy. This is something which I was inspired to use by those great staples of RTS games, Supreme Commander and its progenitor Total Annihilation. This has always been my favourite economy system in RTS games with its elegant simplicity yet hard to master balance requirements. In order for towers to operate (including air purifiers) they will need matter and energy to run – some will require more energy, others will require more matter. Combining this with my air purification economy has giving The Colonist a very unique feel – and one which I hope will add a greater level of challenge to the game.

Here’s a peek at the GUI for this aspect of the game.

As you can see, there’s also a red warning light – this isn’t part of the economy but it is a key factor in what makes The Colonist unique. The day/night cycle. Planet X will of course be infested with alien creeps, like almost every TD game you ever played… but different creeps will attack at different times of day – with the majority only attacking during the red-light (night) part of the cycle – and others behaving differently during the daytime than they do at night. I’ve used this system in place of a standard waves system, it feels a lot more organic and also gives you a solid reason to seriously think about the placement of your base defences.

Here’s an example of what that cycle looks like. 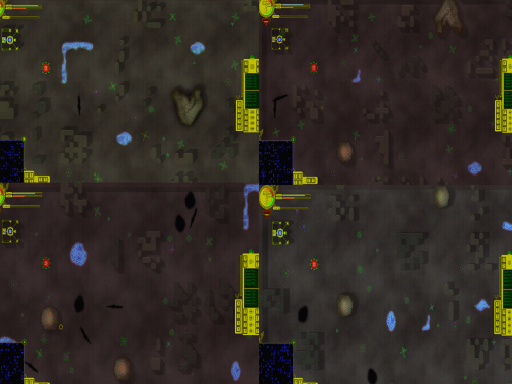 Combined with the CBNA smartlight-driven shadows this not only looks great but gives a really natural feel to the progression of the world from relative safety during the day to extreme danger at night. In my opinion this beats the living crap out my usual wave systems! You’ll also be able to see the random level generation in affect here – instead of following a story based level progression The Colonist is designed for the casual gamer, so a randomly generated skirmish based play-style has been used to give the game infinite variety and replayability. I’m also thinking about tying some of the level features into my economy system – but that’s further down the road for now…

Well, that’s all for today folks – I hope you like the way the game is looking and if you’ve got any ideas or feedback please do let me know!