Johnny Neo – back to work – SHOKIZM

It’s been a while but I’m back to work on Johnny Neo – well actually, I never really stopped. Whilst Psy-Penguin Vs Infinity was a pleasant distraction, that’s all it was… For now my heart is just not in it – every time I try to think of ideas for it I just seem to think of ways to improve Johnny Neo and every time I turn on Game Maker Studio I can’t help but load up good-old Johnny and end up staring at that rather than working on Psy-Penguin… and so it’s back to work with Johnny! 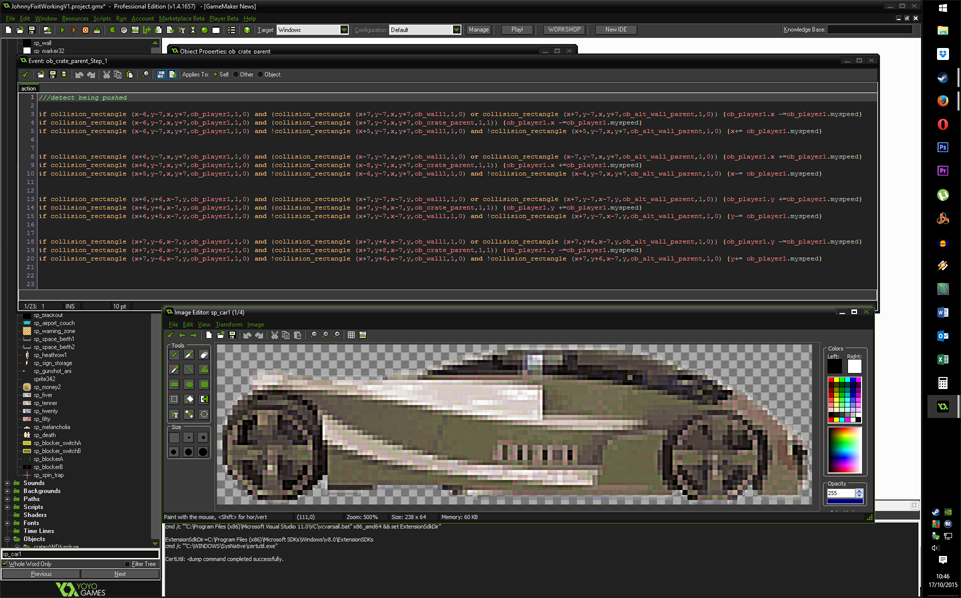 But the few weeks I’ve spent trying to concentrate on other ideas has paid off – because I’ve come back fresher (despite a new day-job which drains 12 hours of my day!) and also more focused. And by focused I mean regarding the direction the game is going in. Originally I had so many ideas in my hard that it was hard to control them – but now things have become a little clearer. I still want the game to tell a good story, and I still want to break things up a lot with mini-games – but, I’ve pretty much decided to drop the shoot-em-up elements of the game completely – along with (for now at least) the battery-based health/shield system I was working on… Quite frankly it was just too many things to work on at once and it resulted in the game feeling messy and incoherent.

I’ve also introduced a new element – money. After all, the game is all about Johnny being able to pay his massive energy bill, this means I can tie the story to the actual gameplay and reward the player for completing off-quest activities such as playing arcade machines or simply getting lost in one of my mazes. I was originally going with Mario-styled-coins but I felt they were a bit derivative, so in the end I went with super-pixelated English banknotes. Again it ties in with the very-British humour of Johnny Neo and I think it’s really different from most games out there.

The game is starting to feel like a modern version of Chips Challenge, with more complex puzzles and some reaction-testing action sections, reminiscent of a platformer but from my beloved top-down view.  Most of the puzzles so far revolve around finding your way through a maze and pushing boxes into the right place to open doors or unlock new areas of the game. And it’s fun – at least for me and my mates who’ve tested it out. We’re still very early on but I feel like Johnny Neo is really beginning to take shape and have a style of it’s own (albeit one which is influenced by retro and modern classics such as Sukoban,  BoulderDash, Solomon’s Key, Bombuzal, Braid, The Talos Principle,  Stealth Bastard and Portal 1 & 2). This is what it’s shaping up to look like right now…

Well that’s all for today folks – time for me to get back to work! See you all soon and as always please feel free to leave comments below! 🙂